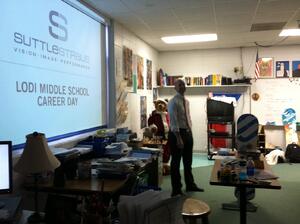 Brett Keene went to the head of the class during Lodi Middle School Career Day on March 12th. Students had a choice of 32 different presenters and approximately 80 students chose to learn about the many different careers available in a manufacturing facility such as Suttle-Straus.

Christine Edgren presented a video on the creative department and design side, while Brett Keene showed the making of a “snowboard” in a high-energy video. The concept to completion project showed the importance of teamwork in any organization. One lucky student from each session won a Suttle-Straus “snowboard.”